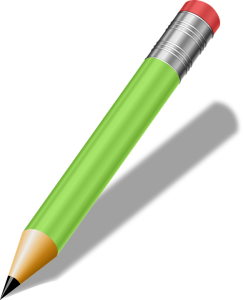 But, fortunately, it doesn’t really matter because I have my 102 Little Drawings That Will Help You Remember English Rules FOREVER (Probably), written by Gabriel EA Clark and Lisa Miller.

As the ‘blurb’ of their new publication says, this nontraditional textbook and grammar guide in one it is a compilation of 102 funny drawings designed to help English learners understand English grammar and remember new English words. It is for intermediate and advanced English learners learning English at home, and it’s also a great resource for English teachers (effective pictures that you can show students or draw yourself on the board). It’s here to give teachers and learners inspiration, some “a-ha” moments and hopefully a few good laughs.

As I was virtually flipping through my copy of the e-book for the very first time, for some reason, I remembered another publication sitting on my bookshelf – a copy of English or Czenglish. This book, written in 1989 by Don Sparling (who, by the way, was once a revered member of my alma mater), probably came to mind because it’s also a sort of compilation, namely a collection of the most common mistakes Czech learners of English tend to make, accompanied by explanations and lots of examples (the correct as well as the deterrent ones).

English or Czenglish, however, contains no doodles. In fact, there are no images whatsoever. This may be viewed as a flaw, but that’s the way textbooks were written in the Middle Ages. Anyway, the main difference between these two publications lies in that fact that 102 Little Drawings has been created for the global market, so unlike English or Czenglish, which exclusively deals with the most problematic areas Czech learners usually struggle with, 102 Drawings tries to tackle some of the problems learners of English grapple with generally, i.e. regardless of their L1s. So, although many of the examples are quite useful (hats off!), some of them are somewhat redundant for a Czech learner/teacher. 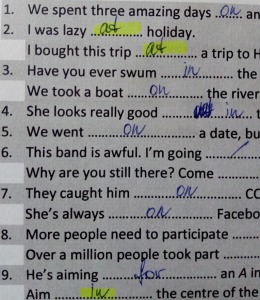 Let me give you an example: in vs. on an island is not a big issue for a Czech learner since in Czech, we use the same preposition, i.e. on. In other words, there’s a slim chance that a Czech learner will ever say in an island. The same will probably apply to other chunks of language, such as on holiday, on a trip, on a journey, etc. I’m saying ‘probably’, but I can actually back up the above-mentioned assertion with evidence. Before writing this post, I made a gap-fill exercise to see if my intermediate students struggled with some of the areas addressed in the book at all. As you can see on the left, I discovered, for instance, that instead of saying in holiday, quite a few students went for at holiday.

Anyway, as I see it, many of the drawings explaining the correct use of prepositions are helpful and practical, such as the one explaining the distinction between in the water/on the water/underwater. Another handy example is the one depicting the phrase in the picture. Czech learners tend to say on the picture since that’s the literal L1>L2 translation. The thing is, however, that no matter how much you focus on explicit correction or how many drilling techniques you use in class to eliminate this persistent error, Czech learners, even the advanced ones, still occasionally say it incorrectly, especially when under pressure. In other words, L1 interference is amazingly powerful in some cases and I’m not convinced that even high-quality visuals will help to uproot it for good. I guess that’s not what the authors are aiming for anyway. Just a point.

The publication is undoubtedly spot on in terms of acquiring and/or teaching idioms and phrasal verbs and my students truly enjoyed learning new words through the lexical mnemonics accompanying the visuals (e.g. mother/smother, crane/Ukraine, ketchup/catch up). And since I’m a fan of timelines, I was pleased to see some doodles explaining English tenses in the chapter called Big Grammar. Although it’s an area in which I’m quite confident as a teacher, the book offers a few inspiring examples I’d never thought of before.

It’s also quite practical to have something to hold on to when explaining the differences between easily confused words, such as cook vs. cooker. This is something you can hear very often in a Czech classroom (and we usually have a lot of fun getting it straight). Still, I must admit that some of the grammar points discussed in the book seem a bit off to me in terms of the level of proficiency. From a point of view of a Czech teacher, some of the examples, such as the distinction between very and more or interested and interesting seem a bit redundant for an intermediate/advanced learner in my teaching context. I can imagine that this area can be problematic for some learners out there, but over here, the difference is pretty clear, even to an A2 Czech learner of English. Also, despite articles being a nightmare for most learners here in the Czech Republic, the difference between a cat and the cat is something that could have been omitted from the book too (I mean… if it had been produced for the Czech market). On the other hand, I’m well aware of the fact that the nuances my learners struggle with most when using articles would be too difficult to present in the form of doodles. By the way, I’d like to know more about how the authors shortlisted the grammar points they decided to address in their book. Was it based on their experience in teaching English in different parts of the world – to people with different L1s? Or is it a collection of random items? One way or another, it’s not easy to please everybody.

I’d like to add that while most of the pictures are pretty self-explanatory, some of them are a bit confusing, such as the attempt to depict the difference between a colon and semicolon. It took me ages to figure out what the authors meant. The reason behind my confusion is probably that generally, I’m totally hopeless at decoding pictograms. Add to that the fact that semicolons are not used in Czech the same way they are used in English (in many cases, a semicolon can easily be replaced by a comma) and you’ll understand my disorientation. So, while a picture is said to be worth a thousand words, sometimes a few words or a short, clear example sentence is much better – at least for me.

In conclusion, I believe the strength of the publication lies in the fact that it makes learning and teaching new language items – and classroom life in general – much more enjoyable. Also, it seems to me that a literal depiction of idioms, such as be on the ball, on cloud nine, on the fence, get wind of, etc., makes them more memorable and thus easier to learn and teach. If the authors are planning to write a sequel, I think they should focus on this area.

Here’s a link to the authors’ blog.