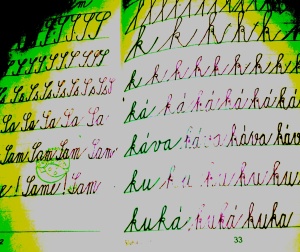 The other day I read Scott Thornbury’s post D is for Dictation. Following the example set by the author, I decided to ponder the value of this popular classroom activity.

There must be something magical about dictation because it was one of the most frequent activities we did in Czech lessons during my formal education, and it still holds true nowadays. The thing is that my mother tongue is a very complicated language and it takes Czech kids ages to learn the rules of its written form. The only advantage is that unlike English, Czech is written as it is heard (with some exceptions, such as words with final voiced consonants, which are sometimes uttered voicelessly). Czech pupils start writing short dictations as soon as they start using a pen – around the age of 6-7 – and judging by the unflagging popularity of this classroom activity, it must be regarded one of the best ways of learning the language.

I’m not sure whether I use dictation for the same reasons why primary teachers over here use it to teach Czech, but I’m convinced that there is a place for dictation in an L2 classroom and that incorporating it into classes is beneficial in terms of language acquisition.

As my primary goal is to teach my students to communicate in English, I find it important to turn dictation into a communicative activity. Can I achieve this? What is a communicative activity at all? This is a question I already considered here and here. Anyway, I mainly use dictation to recycle written texts or audio recordings. My favourite activity is Write the last word you heard. This basically means that I play a recording my students are already familiar with, and at some point I stop the audio – usually where there is a full stop or after longer chunks of language. As the title of the activity implies, students write the last word they heard.

I believe that this procedure turns the dictation into a meaningful listening task; students are exposed to whole chunks/sentences, and they need to pay attention to the context, otherwise they won’t be able to pinpoint the last word. What’s more, while listening, they are forced to ‘replay’ bits and pieces of the text in the heads and they make quick, little choices before they finally zoom in on the word they are looking for. If possible, I deliberately select words that need to be practised – either because they were encountered in the previous lesson for the first time or because of their tricky spelling.

My students like this type of activity because it’s not too challenging – they don’t have to write long stretches of text, which is something they’re used to doing in Czech lessons. Nevertheless, you can obviously ask them to write more than just the last word. You can either ask them to write the first word, which will encourage them to hold each chunk in their memory for a while, or they can write as much as they manage within the time limit between the pauses. Alternatively, to give your learners more freedom, you can allow them to choose words they want to jot down. Later on, you can elaborate on this activity; your students can reconstruct the whole recording/text by completing the bits they’ve recorded. This resembles dictogloss – a classroom activity where learners are required to reconstruct a short text by listening and noting down the key words.

I believe that dictation plays a specific role in an L2 classroom, but it shouldn’t be overused – students need to be exposed to other forms of language practice after all. First of all, the teacher needs to get it clear why s/he wants to use it – is it to practise spelling, vocabulary, listening or something else? Is there a better, a more effective and a more communicative way of practising these language areas/skills or is dictation the right option? These are the decisions that must be made during the planning stage.

I'm an EFL teacher based in the Czech Republic. I've been teaching English to learners of all ages for almost 25 years and I still love my job. You can find out more about my passion here on my blog.
View all posts by Hana Tichá →
This entry was posted in Linguistic issues, Listening, Teaching ideas and tagged chunks, communicative teaching, dictation, listening skills, spelling, vocabulary. Bookmark the permalink.